In this installment Achim checks the crop to decide whether some more nitrogen fertilizer is needed. He also finds evidence of an unexpected crime--damage by rats on the hybrid side of the plot.

Commentary by Achim:
23 February. Last week, Leigh wrote about serenity in the field. So, when I came out this morning, 64 days after planting, I expected to see a lush rice crop happily growing toward a bumper harvest. Instead, what I discovered was a crime scene, a crime committed during the past two or three days. As I started walking through the field, I noticed a lot of rat damage in the hybrid strip, but nothing in the inbred half. The symptoms were clear: rats had come in and bitten off many whole stems. In some places, it looked like someone had gone through with a mower, thinning out the hills on their sides. That's a huge loss because all of those beautiful stems would have produced panicles full of grain.

Too late to compensate, I'm afraid. I was too disappointed to measure the damage, but I estimate that it may have cost us at least 5% yield loss in the hybrid. And, I don't even know whether it is over now. Perhaps the rats will keep coming back for another feast, and there is little we can do about that.

Why on earth did they lunch on the hybrid but leave the inbred variety alone? At first, I developed a couple of conspiracy theories, and I even thought about the weather. It had been raining nonstop the past two days while a tropical depression went through, but why would that make rats go after our hybrid? It all didn't make much sense. The only thing I can think of is that the hybrid stems were just juicier and tastier at the bottom than the inbred stems. The hybrid is about 5 to 7 days ahead in growth, with the first panicles already emerging. It's likely that we're at a high production rate for carbohydrates and that so-called nonstructural carbohydrates (sugars) get deposited in the bottom parts of the stems, to be translocated to other plant organs later on, and to the grain to be filled. So, that makes for a tender juicy bit to chew on. Rats are intelligent creatures. They seem to have figured that out.

After that initial horror, I had to get back to work and decide whether some more nitrogen fertilizer was needed. I walked through both the hybrid and the inbred and took leaf color readings at 10 to 15 locations, using the IRRI Leaf Color Chart.

Considering the latest setback, I'm not 100% sure whether that extra nitrogen will have the desired economic impact, and I'm also far less optimistic that we will get close to our target yield. A lot will depend now on how large the panicles are and how well they fill out. Not much more to do from here on till harvest. We'll just watch that there is enough water in the field and we can only hope that no more crime occurs. 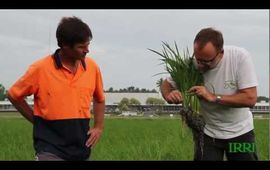 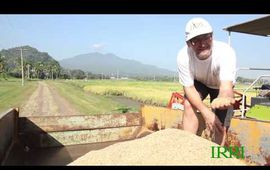 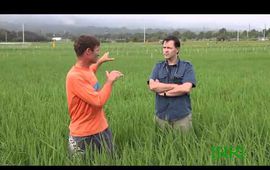 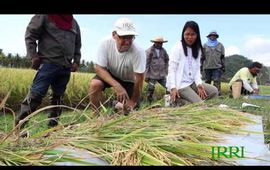