20 December 2012: This morning, we planted our rice crop. We had asked our breeders for suggestions on what varieties to grow this time. On one half, we planted a brand-new IRRI inbred variety, NSIC Rc302 (IR05A272), which was approved for release in the Philippines just a few weeks ago. On the other half, we planted a hybrid that was released in 2010, Mestiso 26 (IR82372H). Hybrid rice is expanding in Asia, so this will be a useful comparison for us. We'll see whether the breeders gave us good stuff.

We were a bit anxious about using a walk-behind mechanical transplanting machine for the first time. The one we had available plants four rows of rice at 30-cm spacing between the rows. I thought we'd need complex instructions and a bit of practical training to be able to use it properly. Instead, when we came to the field, the farm guys had put the machine in place and it was ready to go. They told us briefly what the various levers to pull up or down were for, and suggested to get on with it without further delay. So, off we went. Not so super-straight as drawn with a ruler, but reaching the other end of the field more or less where we wanted to be. Turning the machine around took a bit of practice, but it was all a lot easier than I had thought. It surely beats manual transplanting.

We pretended that we had "ordered" seedling mats to feed into the machine, which is probably also what most farmers would do. In reality, our 13-day-old seedlings had been grown in commercially used trays by farm staff on the IRRI farm, as a seedling grower would do, too. We'll put a dollar value on that service when we do the economics in the end.

Mechanical transplanters have been around for several decades and they are widely used in countries such as Japan or South Korea, but we have seen quite a spread of this technology to other countries in South and Southeast Asia in recent years, driven by rising labor costs. They are actually a new business opportunity for small entrepreneurs, including those who invest to own such a machine and offer it as a paid service, and those who become specialized seedling growers, which is also a new income opportunity for women. I have seen quite a bit of that happening in various countries during field visits I have made in 2012.

It took us about 2 hours to complete the planting in our 0.25-ha field. I reckon that a small team of professional operators would have done it in half the time. The engine stalled twice, but, with a bit of help, we were able to get it going again. This did remind me, however, that a machine is a good option only if it doesn't break down or as long as you have access to a repair service.

Other than that, the whole process highlighted once again how important land preparation is. We had some patches in the field where the soil had been tilled a bit deeper or where it was very muddy due to standing water. Those were real trouble spots for getting the machine through. It would sink in too much or swerve to one side, or the small seedlings just disappeared in the mud. The "ideal" would be a field that had been tilled uniformly to about 15-cm depth and with a nice, level surface. That's certainly a critical condition to fulfill for mechanized planting on heavy, highly disperse clay soils.

Overall, we're quite pleased with the outcome and we should have peace of mind for a couple of weeks as we'll enjoy the holidays. The only other thing done right after planting was an application of a pre-emergence herbicide. We'll keep the soil water-saturated for the next couple of weeks, which will, we hope, also prevent snails from moving around and chewing off our beautiful young seedlings. 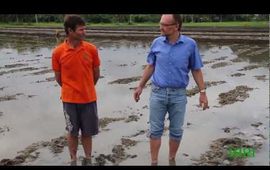