Achim Dobermann, deputy director general for research at the International Rice Research Institute (IRRI; http://irri.org ), and Leigh Vial, head of IRRI's experiment station, are conducting a special project, the IRRI Agronomy Challenge, in which they are demonstrating how to grow a productive rice crop in a 25 x 100-meter field on IRRI's research farm.

21 February: "Forty-five days after sowing and we're getting close to the panicle initiation stage -- a surprise for Leigh because he thought it would take much longer to get there, as it indeed does in temperate rice-growing regions such as Australia. Stem elongation will start soon, so the crops start looking a bit hungry already. As per our nutrient management recommendation, the next nitrogen application was due today. We lowered the water again for that and I put on another half bag of urea as prescribed.

Nancy's team was out there this morning to do their crop injury assessment. An 8.5% rat injury and over 25% whorl maggot seem to be our major problems so far. The latter is more than normal, I'd say. The general wisdom is that this kind of leaf damage during vegetative growth rarely causes significant yield losses, but I admit having doubts about that if it is that high. It seems that most of the research on whorl maggot damage was conducted in the 1970s and 1980s when yields were usually in the 4-5 t/ha. Has anyone verified this in more recent years, at much higher yield levels? Is our knowledge on that still correct? I don't know.

I also spent some time this morning wondering whether we should do anything about prophylactic stemborer control. Nancy only found 0.37% deadheart damage, but what if they still come? If we decide to apply a systemic insecticide for prophylactic protection we'd have to do it now. Information I found on that in the Rice Knowledge Bank was not really "actionable". The IRRI fact sheet states that "Chemical control of stem borers is generally not recommended as stem borers are quite difficult to control with insecticides. .... Systemic insecticides, which go inside the plant, are the only reliable form of chemical control for stem borers after the borers have entered the stem, but by then it is generally too late to save the rice stem anyway.

So, what should we do? Nothing and hope for the best? If our goal was to conduct a maximum yield trial I would probably apply a systemic insecticide such as carbofuran (usually marketed as Furadan and applied in granular form into the standing water). But it is a very toxic pesticide and already banned in the some countries. The large database we have in IRRI on crop losses in rice suggests that yield losses due to stemborer are mostly in the range of 1-3%. It can be more, but that is rare. So, it's probably not worth to put Furadan on. We'll take some risk of yield loss, but it'll be small, I hope."

Lessons learned
I find it hard to make advance decisions on pest management and there is little diagnostic guidance for that other than combining general knowledge with a bit of common sense. Counting egg masses of stemborers before they hatch, for example, would be quite tedious and perhaps also inaccurate because many natural predators eat those eggs anyway. So, I am uneasy about all that and I can understand that farmers struggle with making such decisions. 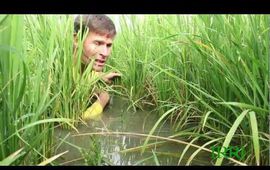 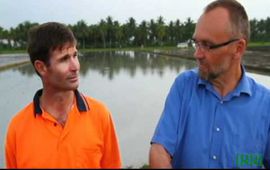 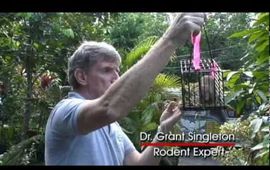